Though they do not discuss the global economic slowdown, Biden and Xi speak. 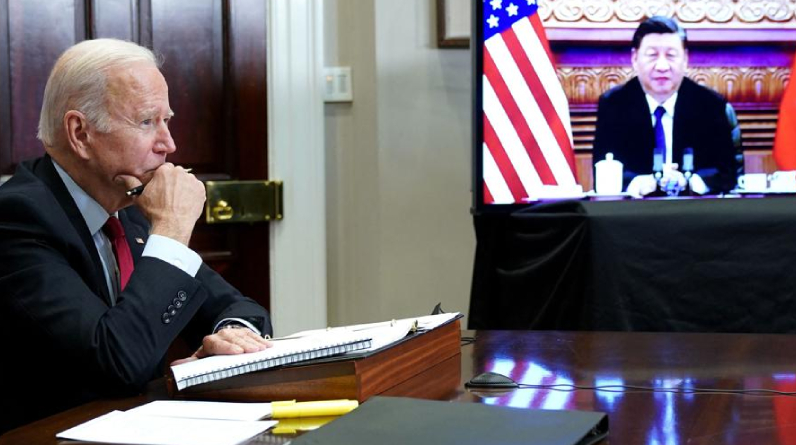 One cannot help but feel a strong sense of nostalgia for the actual Cold War, which ended decades ago, when Presidents Biden and Xi Jinping wrapped up their fifth round of virtual negotiations this week. At least there were strong checkpoints and a formal debate forum in place during the war between the USSR and America to prevent the worst-case scenario of the time—a nuclear holocaust.

A simple conversation between the two leaders is preceded by elaborate diplomatic choreography to ensure that expectations are low, and ends with a pro forma statement that the dialogue was “substantive, it was in-depth, and it was candid,” as a senior White House official indicated on Thursday. In contrast, U.S.-China relations, which geopolitical analysts insist are not on a new Cold War footing, are shaping up to be unpredictable. To be safe, the Chinese side added that “the two Presidents had an open dialogue and exchange on China-U.S. relations and relevant topics.

Diplomats will disagree with my assessment that the U.S.-China dialogue is largely theoretical and devoid of action because the two nations are keeping the lines of communication open, which is a good indicator for avoiding unforeseen repercussions. Will it, though?

China has increased its support for Russia since its invasion of Ukraine, calling it a “friendship without bounds” when Putin paid Beijing a visit in February. By purchasing massive volumes of heavily discounted Russian oil, China (and India) are also supporting Russia’s economy and mitigating the effects of western sanctions. The likelihood of a grand bargain agreement between America and China being reached in the foreseeable future is reduced by China’s support for Russia.

Since Biden took office, there have been some hopes for a policy convergence between the United States and China in crucial global public good areas like climate change and health. The extreme measures China took to banish Covid (which resulted in protracted lockdowns in major cities) and an increase in coal production to address ongoing energy shortages reduce the likelihood of an early agreement, even though these issues were mentioned once more in the read-out from both sides following the call.

Furthermore, President Xi will be focused on winning a third term for the remainder of the year, which eliminates any chance of Chinese flexibility in the near future. China does have serious concerns about American assistance for Taiwan. The upcoming trip to Taipei by House Speaker Nancy Pelosi, who will be the highest ranking American official to visit the island since 1997, has once again brought attention to this problem.

Since Russia’s invasion of Ukraine, some commentators have suggested that Beijing is considering a future invasion of Taiwan using a similar strategy. Although it doesn’t seem like such an invasion is about to happen, Taiwan will continue to be a point of contention between the two nations.

There is a critical area for international collaboration that was not covered in the readout from the two parties. The International Monetary Fund forecast last week that the growth of the world’s GDP in 2022 and 2023 will likely fall even more, to 3.2% and 2.9%, respectively. Weak growth in America and China, two traditional global economic development engines, is a significant factor in this downturn.

The world economy cannot wait for America and China to come to an agreement on all of their differences, which are likely to take some time to resolve. It is being kept alive.

To ensure that there is a plan and funding available to deal with the current downturn, the heads of the two biggest economies in the world must actively participate in international organisations like the IMF and G20. Along with her Chinese counterpart, Treasury Secretary Yellen did take part in the President’s phone call. The logical next step would be to show that despite the Cold War moniker, the two nations can truly cooperate for the common interest.